Appayya Dīkṣita: The Many Identities of an Early Modern South Indian Intellectual 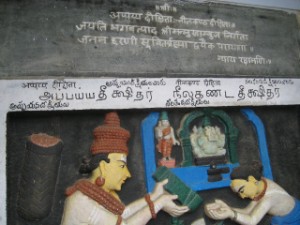 Appayya Dīkṣita (c. 1520–1593) was one of India’s leading intellectuals in the sixteenth century. He was an extremely prolific polymath who authored some one hundred books in an astonishing array of disciplines and genres and a great innovator in every field he entered. Despite his association with minor courts in the tip of the Indian peninsula, his work spread rapidly and drew immediate enthusiasm and ire in Delhi and Banaras.

Bronner has published extensively on Appayya Dīkṣita’s treatises on poetics, his poetry, and his reinterpretation of the Rāmāyaṇa. His latest project, funded by the Israel Science Foundation, builds on these earlier publications and is meant to create a reliable and detailed biographical account of Appayya Dīkṣita’s life, identify what was new and unique in his debates with his main interlocutors, and study the construction of traditions about him. Bronner has completed two essays that sketch the development of biographical materials on Appayya Dīkṣita in the past five centuries. One was published in a collection of essays on the great scholar edited by Christopher Minkowski, while the other appeared in South Asian History and Culture. A third paper on the Upakramaparākrama, one of Appayya’s works in the disciplines of Mīmāṃsā (Vedic Hermeneutics) and Vedānta, has appeared  in the Journal of Hindu Studies. This last paper explores Appayya Dīkṣita’s innovative intervention in interpretive theory, the topic of First Words, Last Words: New Theories for Reading Old Texts in Sixteenth-Century India, a book Bronner co-wrote with Lawrence McCrea (Oxford University Press 2021).

A Lasting Vision: Daṇḍin’s Mirror in the World of Asian Letters

Fragments of manuscript of Daṇḍin’s Mirror

The Mirror of Poetry (Kāvyādarśa) by Daṇḍin (c. 700, Kanchipuram) is one of the most influential treatises ever produced in Asia. This work on Sanskrit poetics was translated and adapted into a variety of languages in the south (Kannada, Sinhala, Pali, and Tamil), traveled to Southeast Asia (Burma and Indonesia), was translated into Tibetan (where it became a foundational text, repeatedly commented on) and Mongolian, and may even have exercised influence on the formation of Recent Style poetry in China. It also attracted a large following within the Sanskrit tradition throughout the Indian subcontinent.

Bronner has published on various aspects of Daṇḍin’s text and on the nature of its relation to its main intertext, Bhāmaha’s Ornaments of Poetry (Kāvyālaṃkāra). He currently leads a team effort that focuses on the text’s Asia-wide impact. This group hopes to explore the Mirror’s modes of dissemination and the reasons for its phenomenal success and to compare the way it fared in different regions and literary cultures. The team first met in October 2012 in the form of a preconference at the 41st Annual Conference on South Asia (Madison, Wisconsin) that was co-organized with Charles Hallisey and Jennifer Clare. The team has resumed its work as an intensive research group at the Israel Institute of Advanced Studies in Jerusalem in September 2015, and a large international workshop on this topic, co-organized with Charles Hallisey and David Shulman, took place at the institute in December 2015. A special issue dedicated to the group’s work on one specific figure, “condensed speech” (samāsokti), is out in RSO (Rivista degli studi orientali 2017, 90). Another publication that emerged from this group and that Bronner coauthored with Helen Creese is forthcoming in the Journal of the American Oriental Society. A large collaborative volume on Daṇḍin and his Asia-wide afterlife, the result of this group work, is forthcoming from Oxford University Press. 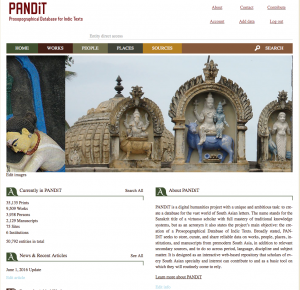 PANDiT is a digital humanities project with an ambitious task: to create a database for the vast world of South Asian letters. The name stands for the Sanskrit title of a virtuoso scholar with full mastery of traditional knowledge systems, but as an acronym it also states the project’s main objective: the creation of a Prosopographical Database of Indic Texts. Broadly stated, PANDiT seeks to store, curate, and share reliable data on works, people, places, institutions, and manuscripts from premodern South Asia, in addition to relevant secondary sources, and to do so across period, language, discipline and subject matter. It is designed as an interactive web-based repository that scholars of every South Asian specialty and interest can contribute to and as a basic tool on which they will routinely come to rely. PANDiT grew out of the Appayya Dīkṣita project and is still in its pilot stage. For more on PANDiT and our current work, please visit our website. PANDiT is built and maintained with the help of “Top Down Up: Academic and Research Databases.”

Toward a History of Sanskrit Poetics 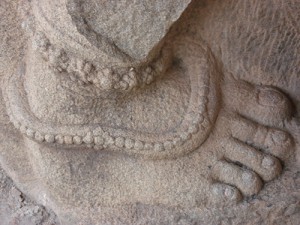 The intellectual discipline of Sanskrit accompanied literary production in the highly prestigious medium of Sanskrit for nearly two millennia, beginning in the early centuries of the first millennium CE and continuing uninterrupted into the early modern era. It formed an important component of the education of Sanskrit literati and of writers, scholars, and artists in other languages and media.

This scholarly tradition is in need of a new and unbiased historical account. Several of Bronner’s earlier publications have laid the groundwork for such an account. An example is “Understanding Udbhata,” a long essay on the pivotal moment of innovation of Sanskrit Poetics in Kashmir under the auspices of King Jayāpīḍa. Bronner is currently working an extensive historical reader, provisionally titled Reader on Alaṃkāra: A Historical Sourcebook in Classical Indian Ornamental Theory. This reader, under contract by Columbia University Press as part of the Historical Sourcebooks on Classical Indian Thought series edited by Sheldon Pollock.

Mapping the World through Courier Poetry 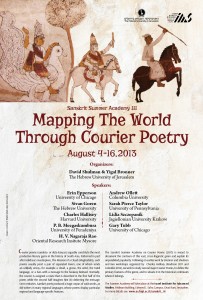 Courier poems (sandeśa- or dūta­-kāvyas) arguably constitute the most productive genre in the history of South Asia. Patterned in part after Kālidāsa’s masterpiece, The Mission of a Cloud (Meghadūta), such poems usually posit a pair of separated lovers, one of whom sends an unlikely envoy—for example a cloud, a goose, the wind, the Tamil language, or a bat—with a message to the faraway beloved. Normally, the courier is assigned a route that is described in the first half of the poem, while the second half imagines him (it) delivering the message. Sanskrit poets produced a large corpus of such works, as did writers in many regional languages, whose poems display particular regional and language-specific features.

This project is meant to document the contours of this vast, cross-linguistic genre and explain its unparalleled popularity. It stems from several publications by Bronner and David Shulman (Hebrew University) and was initiated in a pair of workshops organized by Charles Hallisey (Harvard University) in October 2011 (a preconference at the 40th Annual Conference on South Asia; Madison, Wisconsin) and August 2012 (a workshop in Colombo, Sri Lanka). The third Sanskrit Summer Academy, a two-week intensive workshop which took place at the Institute of Advanced Studies in Jerusalem (August 2013), was the culmination of these efforts, and a Zoom-conference in March 2021 regrouped the participants, who presented final drafts of their papers. Bronner and Shulman are now working on an edited volume on courier poetry based on these drafts.

Toward a History of Sanskrit Poetry

It is hard to think of a tradition comparable to Sanskrit kāvya, which allowed poets to imagine or create the world continually for two millennia in South Asia proper and, for long stretches of time, far beyond its shores. Much of Bronner’s work is dedicated to capturing the aesthetic ethos, goals, and evolution of this literary tradition. Together with Gary Tubb (University of Chicago) and David Shulman (Hebrew University), Bronner has edited a vast volume titled Innovations and Turning Points: Toward a History of Kāvya Literature. This ambitious book, whose roots go back to a yearlong workshop held at the Institute of Advanced Studies in Jerusalem (2003–2004), argues that the vivacity of this literary tradition results from a series of literary breakthroughs and moments of great innovation (Oxford University Press, 2014).